Earlier this summer I got the opportunity to go out to Calgary, Alberta to teach a workshop and judge the freestyle component of the competition they were hosting at their annual national jam, PKAB. I had never been to Calgary before and I was excited at the prospect of exploring a new place, meeting the parkour community out there and learning new things
about movement and coaching.

To make this trip even better, one of my best friends, Ethan, who also happens to be one of the coaches for my parkour business, Play Project, was able to make the trip with me. Ethan is currently going to school at the University of Ottawa and is doing his Masters in Human Kinetics with a focus on coach development. Since Ethan is analyzing parkour coaching and the role of
parkour coach development programs in his thesis, he has been able to get university travel grants to follow me around on most of the parkour trips I made throughout the summer that involved teaching. 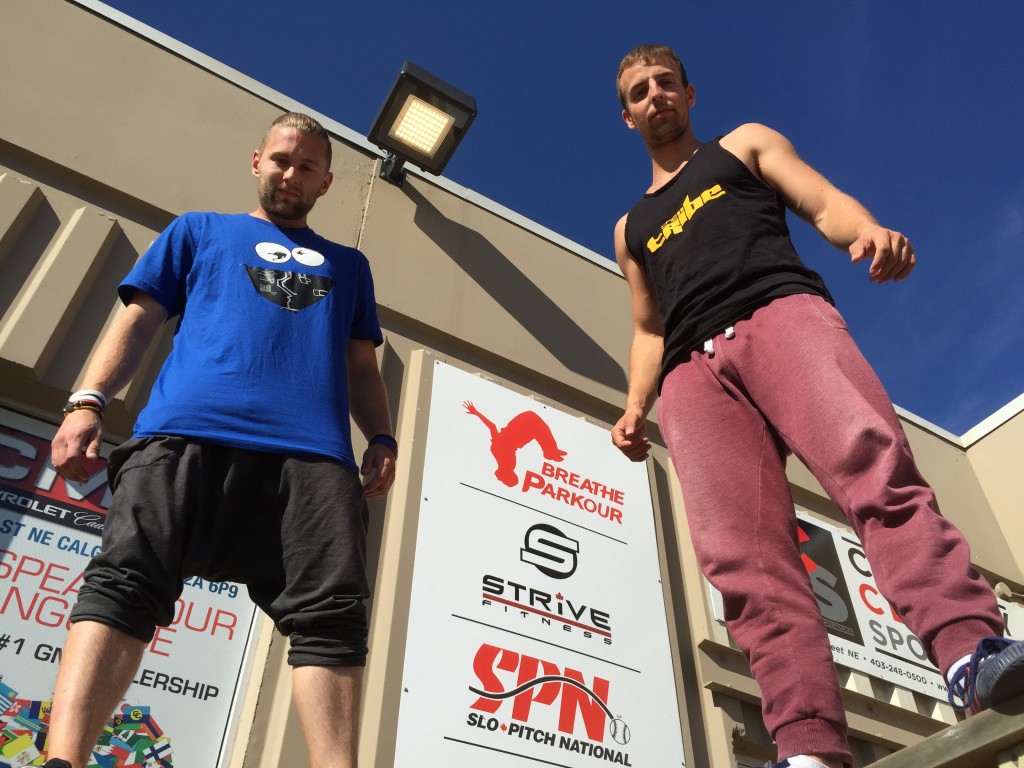 Tyler Harder (Empire PK) in an APK Cookie Monster shirt, with me, in front of Breathe Parkour

We ended up flying into Calgary a few days before the meet so that we would have more time to learn about the parkour community that is out west. Not really knowing what to expect, Ethan was equipped with his thesis paperwork and I was prepared and loaded up with my lesson plan for the workshop that I was leading, as well as a bunch of APK gear that APK had graciously
generated to the jam.

When we arrived at the airport one of the owners of Breathe Parkour, Frankie Talbot, picked us up in the Breathe Parkour truck. We had never met Frankie before, but immediately, we all clicked, bonding over our views about parkour, and an inside joke about her dog, Guinea. In the next few days before the jam, we spent our time hanging out with Frankie, her husband Matt, who is also an owner of Breathe Parkour and the local Calgary community. 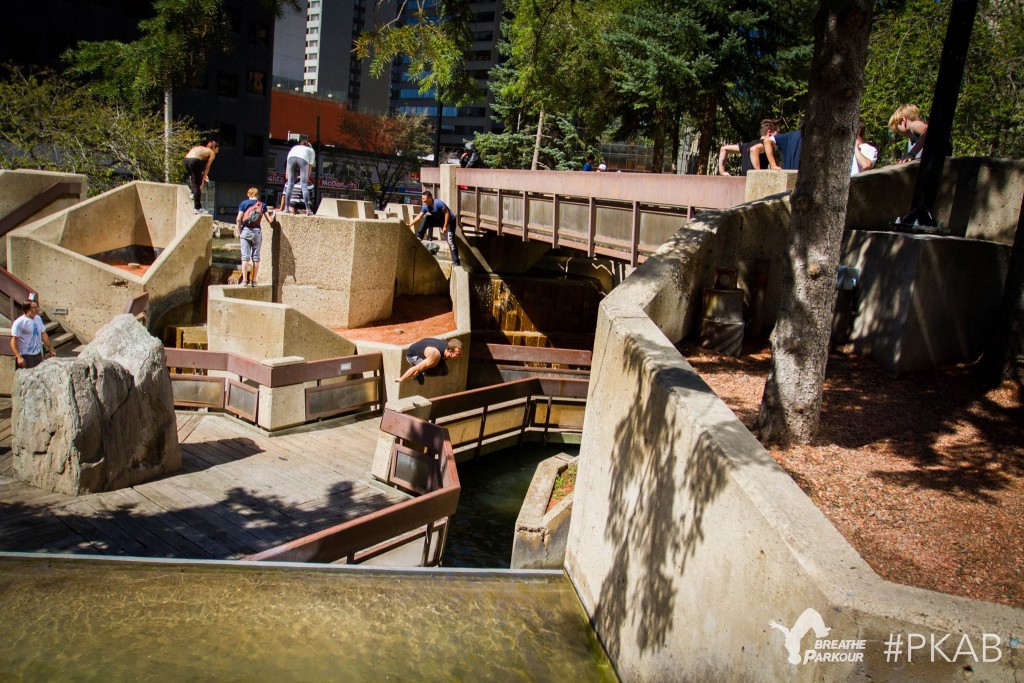 Trevor doing a kong precision over water at Century Gardens.

It was great seeing familiar faces from the Calgary community again, since I had met a number of the locals at jams in Vancouver that I had attended in previous years.  Some of the locals that we trained with included the PODI Boys, Patrick Schmeikal, Davis Johnson, and the members of Empire Parkour (a group of traceurs from Saskatchewan who also showed up at the event a few days early).  Most of our training consisted of gym training, but that was all right, considering Breathe Parkour Calgary is a very diverse space with a variety of unique, modular obstacles, that are good for setting up almost anything you can imagine.  I took the time to work a bit on bar training as well as precisions at height, since there aren’t that many opportunities to train those things back home.

Leading up to the jam, Ethan and I had a lot of fun adventures.  My favourite of which included exploring some waterfalls in Canmore with Frankie and helping to build more obstacles for the gym until the early hours of the morning. Naturally throughout the fun times, we ended up talking to our hosts and the local community about all of the latest happenings in the parkour community, as well as how we think parkour will continue to develop over the next few years. Discussions like that are definitely one of my favourite things about traveling for parkour, since they tend to give you a new perspective and renewed energy in your own training and practices. 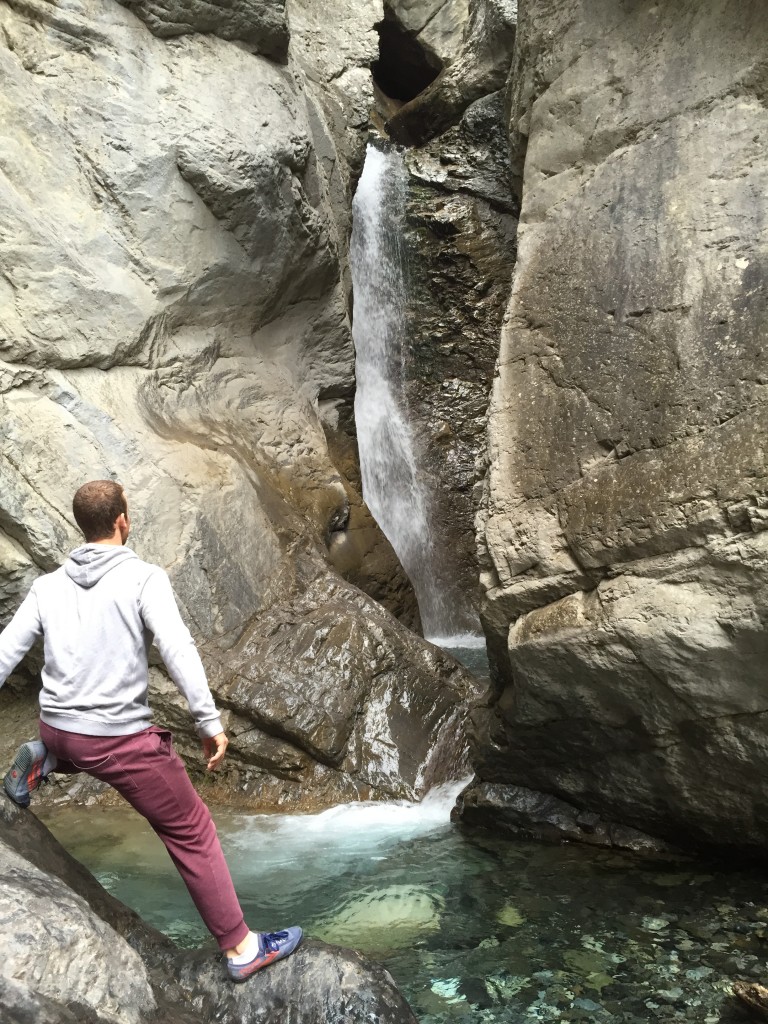 Before I knew it the first day of the jam arrived and we started it off at one of Calgary’s best spots, Century Gardens. Unfortunately, Century Gardens will be torn down this year, and the structure that is replacing it doesn’t seem to have much potential for parkour training compared to the current iteration of the park.  When I arrived at the park, there was a decent amount of traceurs there.  It was refreshing to see so many old friends who I hadn’t seen in a while, including Zach Wiebe, Natalie Nikiforuk, Josh Brauer, and Rene “Res” Scavington from Origins Parkour to name a few.  My favourite thing about Century Gardens was the river that ran through the park, it provided some unique opportunities for challenges, in terms of limiting whether you could overshoot or undershoot various jumps and vaults.  After we trained for a few hours, we grabbed a group jam photo and broke for lunch/dinner.

I ended up grabbing food with Chad McDonald (from A.P.E) and Rob Hill (from Breathe PK) and I got to hear about the new facility that A.P.E is opening in Grand Prairie in the New Year.  It was refreshing to hear about other people opening up parkour facilities all across the country, especially considering each facility has the potential to introduce parkour to so many new practitioners.  It was nice to draw similarities between A.P.E’s progress towards a gym and my own progress, since my business, Play Project, plans on opening a space in the future as well. When we got back to Breathe Parkour, everyone was getting ready to run the speed competition, which was scheduled to take up most of the evening.  I liked the courses that were presented, and it seemed as if everyone had fun night. The atmosphere in the gym was really positive and all of the competitors and spectators were always cheering the other participants on.  During the speed competition, I took the opportunity to finalize the lesson plan for my
webster seminar, which was scheduled for later that night.  Empire Parkour ran the other workshop that was scheduled and it was interspersed between the main event of the speed competition and the finals.  After the competition finished and both workshops ran smoothly, we got food and went to bed relatively early, since we knew there was another long day of training ahead of us. 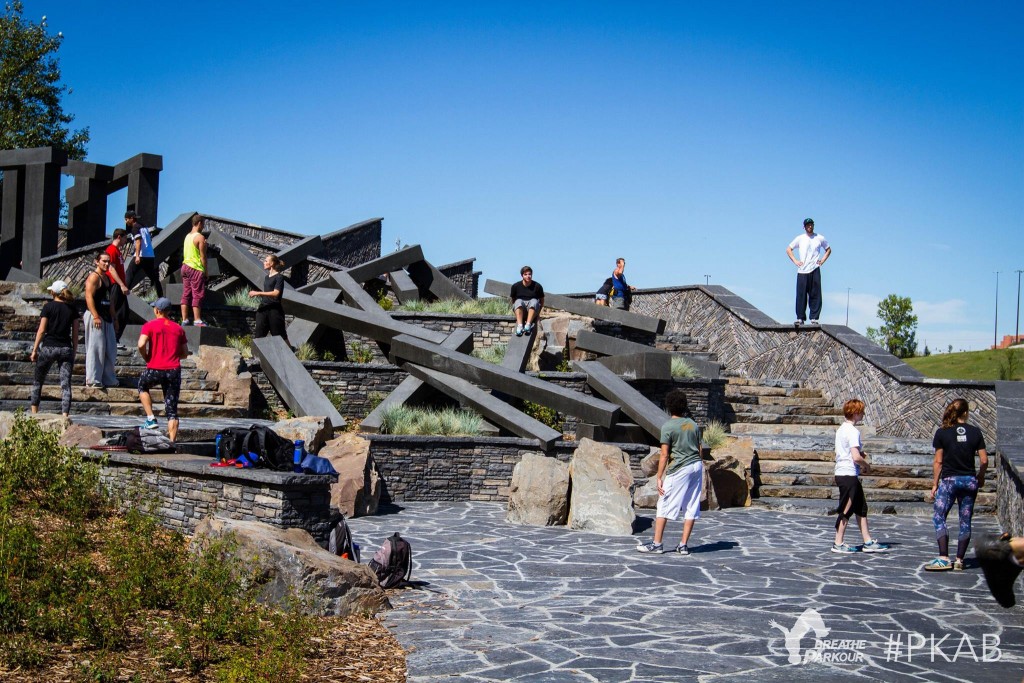 The second day of the jam was supposed to be held at a trampoline park called Flying Squirrel, but most people wanted to train outside instead.  As a result, the jam split in two, most of the participants heading to train outside, and some others going to the trampoline park. I’m glad I decided to train outdoors, because the spot we went to in Inglewood Park was amazing, and it definitely gave Century Gardens a run for being the best spot in Calgary.  We spent our time there coming up with awkward challenges and runs because the surfaces were uneven and created different angles than are used in typical architecture.

After the great day of training, we headed back to the gym, grabbing food on route.  It was time for the freestyle competition, and I was enlisted as one of the four judges, being in charge of judging movement quality (looking for quiet landings/takeoffs, ease of movement, control, etc.). I had a great time judging, and it’s definitely something that I would be interested in doing more
of.  I also really enjoyed the format of the competition, which was very similar to this year’s NAPC freestyle event, in which the competitors had to make one fluid run that incorporated a few different areas in the gym.  Between and after the freestyle competition both Origins Parkour and A.P.E lead some pretty interesting workshops, which served as a solid way to end the event. After more parkour related discussions that night with Matt and Frankie, we headed to bed, not looking forward to our flight home the next morning because we had such a good time in Calgary. 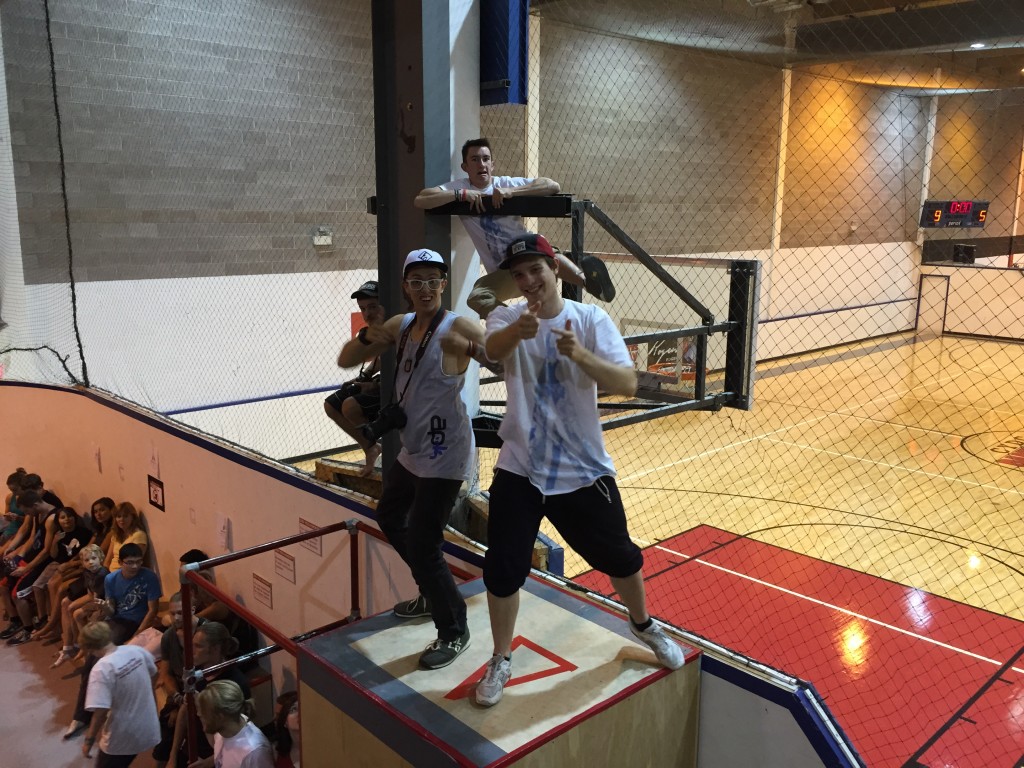 A look from the judging platform at one of the spectator towers.

As I sat on the plane home I reflected on my trip, and overall the Calgary parkour community impressed me.  They’re a tight knit group of people who are dedicated to promoting the growth of parkour, and having fun while they do it.  As with every trip, I learned a lot during my stay in Calgary, I shared good times, with great people and I came home with memories that will definitely hold me over until the next time I see this group of friends.  If you ever find yourself in Calgary, Alberta, I highly recommend checking out Breathe Parkour and trying to get involved with the parkour community out that way. 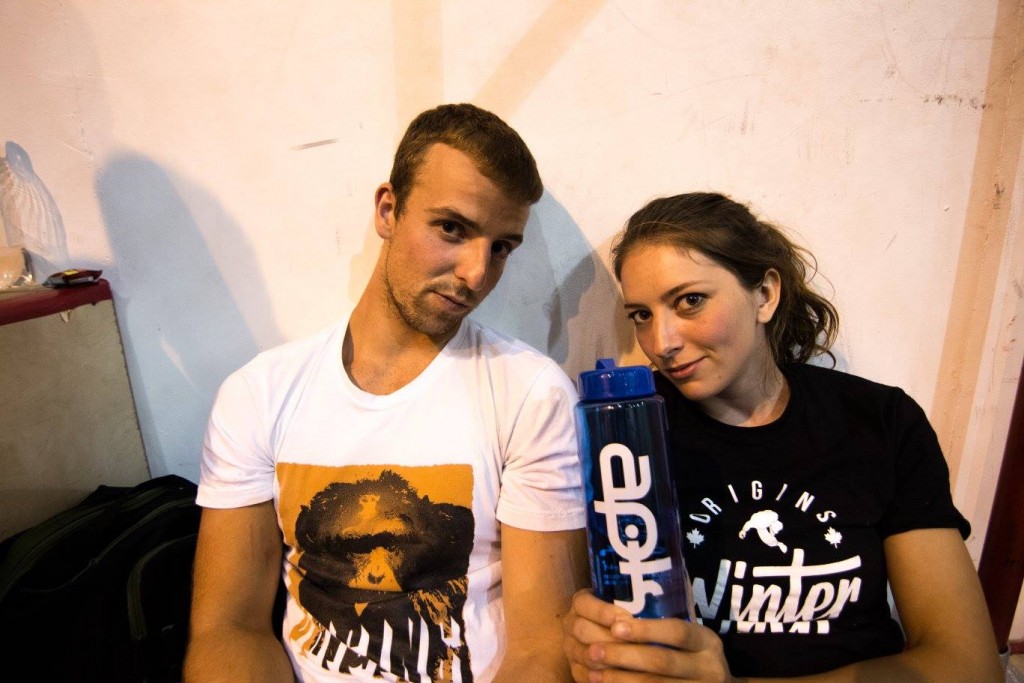 Thanks for reading, until my next adventure!

Thanks Steve Nagy, Jay Ewanchook and Trevor de Groot for the awesome photos!