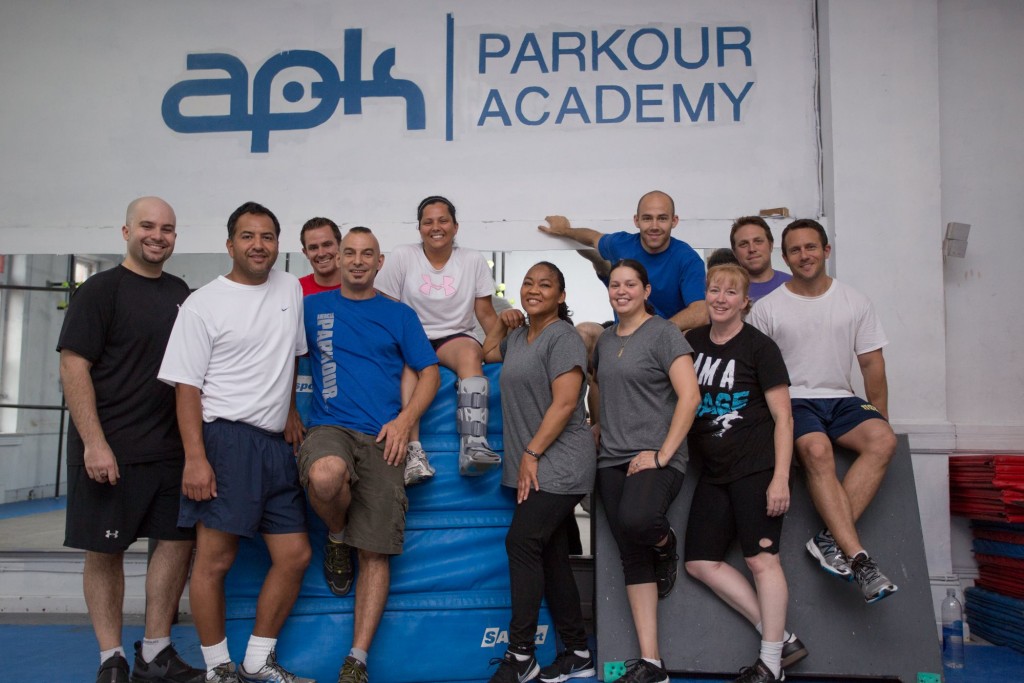 I recently had the opportunity to sit down with Mark Toorock (Founder of APK) and Travis Graves (Director of APK Academy and Tribe Member) to talk about a workshop they did in August 2013 with eight veterans from the Wounded Warriors community.

The workshop focused on balance, rolling, precision jumps, foot placement, and a little bit of vaulting. Many of the Warriors gravitated towards the balance and mobility work, possibly because that’s something that’s not as common in their previous training and they wanted to improve upon those skills. Travis reflected that it was interesting to see how they applied their own training to the parkour workshop since, as members of the military, they’ve all gone through some kind of obstacle course training before. 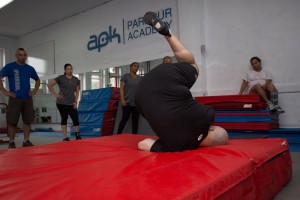 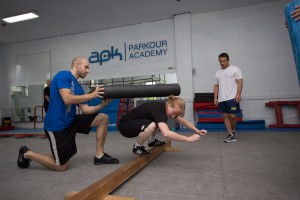 A couple of them were very hesitant at first– they were uncomfortable being in a situation where they felt they might not be able to perform, which is common for people who were once physically very fit and are now limited in some ways. “To start with something very basic, and find that hard, can be very frustrating,” Travis explained. Anyone in that position has to overcome that mental block of “I can’t,” which is really more “I can’t do what I used to be able to do,” than “I can’t do anything.” You just have to get out of that mindset. Parkour helps people do that.

One of the reasons parkour is so attractive to people is because of that lifelong journey of self-improvement and challenging yourself in new ways. Parkour is about going from where you are to better, which is defined by the individual. “Better” just means improved. It is not an end goal, but rather a constantly changing marker of progress and improvement. It is simply more than you could do yesterday.

“They have worked through pain and fear. They demonstrate so much character and resolve. They are truly amazing people. Each one of them is a hero in their own right.” -M2

All of the Warriors at the workshop had suffered serious injuries and traumas, limiting them in some way, and yet their spirit was unbreakable. There were men and women, some with missing fingers, others full of shrapnel, with metal plates, semi-paralysis in one leg, and the list goes on. They have also, in many cases, suffered from varying levels of a combat stress injury or PTSD. They’re in the roughest shape of their lives and have given the ultimate sacrifice in service of their country, but they all had an incredibly open and positive attitude. They were psyched about jumping around and playing, whatever that may look like for them. There was a truly amazing spirit in that group of people.

For them, adaptability was second nature. They have all had obstacles that are way beyond what the average parkour athlete (or the average person for that matter) can imagine. In parkour, we seek out obstacles. These Warriors have had obstacles thrown at them. Every single one of them truly was a warrior. Even though some parts of the workshop were harder for them or different or challenging, they were tanks–they just went right through it. They weren’t afraid of the challenge nor afraid to fail, they were afraid to not try.

“It was really inspiring to get to work with them.” -M2

When asked what the biggest challenge was in working with the Wounded Warriors, Mark replied, “Feeling overwhelmed by what they had given, and trying not to let that interfere with a normal parkour lesson. If you could give a parkour lesson to a superhero, could you just do it?” These individuals were so inspiring for what they had given to our country and the obstacles they had overcome, it was hard to treat them as normal, and not as the superheros they really were.

Mark continued, “They were all so appreciative–they talk about it like we had done something for them. And these are people who have been blown up in defense of our country. They were grateful like ‘Wow, you guys were awesome’ and ‘This was so much fun, thank you for doing this!’ and for them to be thanking me, it felt weird. It felt out of place like we should be thanking them.” 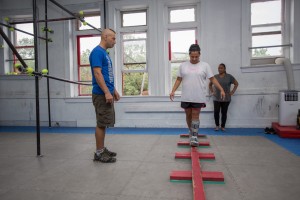 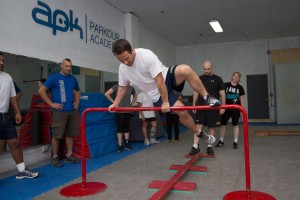 When asked what the Warriors got out of this experience, Mark replied, “It was fun. Genuinely fun.” He went on to explain that that sense of play is really important. “I think they really enjoyed that,” he said, “just to be a kid.” It is definitely challenging, but it also very fun and that is key. I think the most important part of the parkour experience is it gives you a chance to play. Additionally, a lot of them gained a sense of accomplishment through the types of movement they were doing. Even though they’ve all accomplished some truly amazing things, they have somewhat been in a state of can’t and this workshop gave them a chance to take that and flip it into a can attitude.

I asked Mark if he thought parkour was particularly beneficial for this community. “Absolutely,” he said without hesitation, “Mostly because of that can’t-to-can attitude change. They think about what they can’t do anymore… and then we help them find a ‘can.’ We guide them to see what they can do. It doesn’t matter how big or small that accomplishment is…we care what the accomplishment is compared to that person.”

Overall, it was a fun, challenging, and incredibly rewarding experience for everyone involved. At APK, we believe in the power of parkour to improve people’s lives, and I think doing more workshops and community projects like this is a wonderful way to continue that mission.

Special thanks to Mark Toorock and Travis Graves for leading this workshop, and talking with me about their experience so I could share it with others.

If you’re interested in holding a parkour workshop for your organization or exploring a community partnership with APK, please email Adrienne Toumayan (Events & Outreach): [email protected]