This year’s Red Bull Art of Motion was set to be an even more exciting event than usual before the broadcast had begun. The roster was stacked with well-known high level athletes through and through, especially after gaining six athletes from the on-site qualifiers. These six athletes were Erik Mukhametshyn, APK’s own Bob Reese, Jason Paul, Dominic Di Tommaso, Achraf Dibani, and Johan Stahle. The event would consist of three heats and the top two from each heading to the finals. 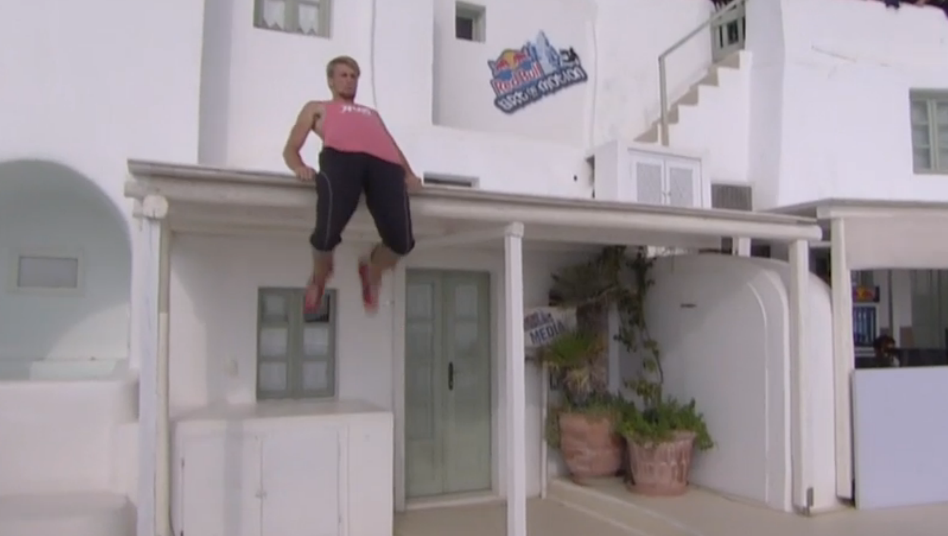 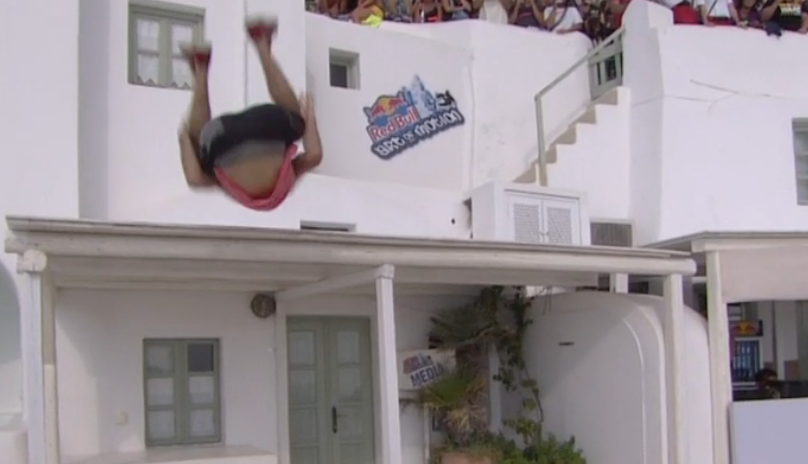 Alfred Scott’s sitting dash gainer is a movement we’ve only seen him perform and definitely the only time we have seen it thrown in competition. It has a high level of difficulty as well as adequate creativity. It takes a certain kind of freerunner to pull off a movement like that. 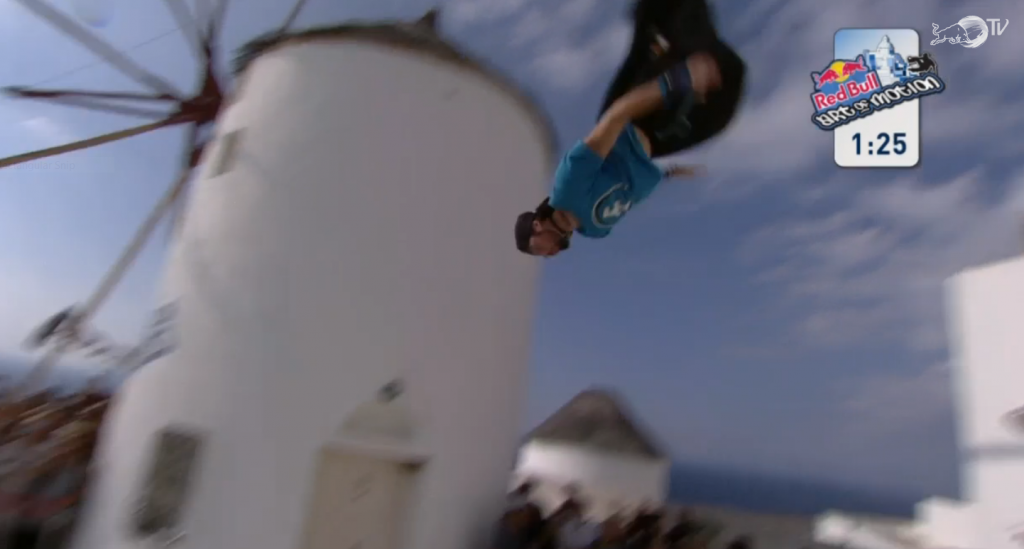 Yoann Leroux has a heavy background in parkour giving him an iron mind set and lots of familiarity with high drops. He opened his run with the largest gainer drop we have seen in the Art of Motion from about 15 feet high. It was very surprising and caught us off guard and he flowed out of the drop extremely well. It was a very high difficulty move that he made look easy. 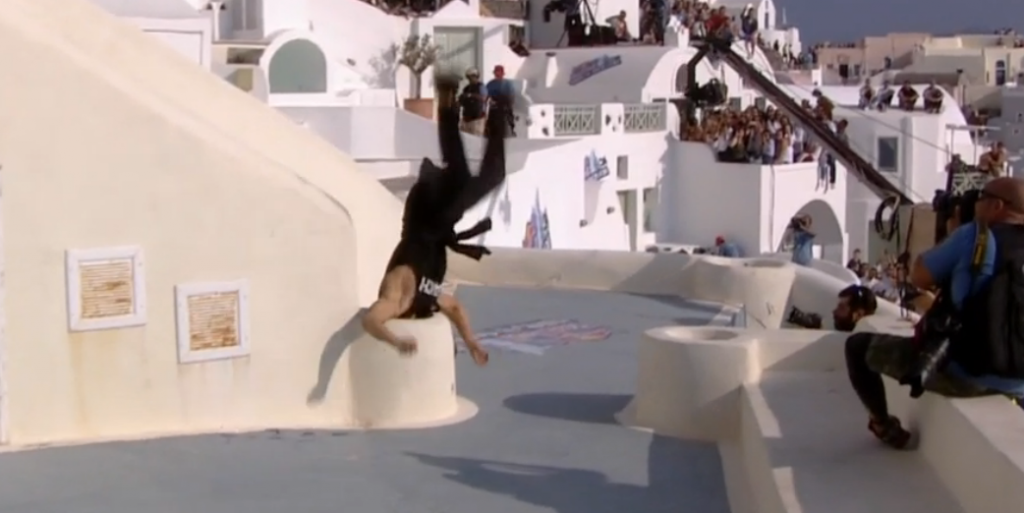 Alexander Bayturin is a two time podium placer (2nd in 2013, 3rd in 2014) who returned to Art of Motion this year. As large fans of cartwheels and their overlooked simplicity, we knew this buckethead cartwheel would be a favorite the moment we saw it. It really showed his style and personality while tying into a very solid run.

This heat made for one of the hardest decisions between individual runs for me. When it comes down to the styles I enjoy and who kept me captivated and gave me something new from them, Erik earned my vote. Erik started off the event by coming in hot and nailing his front flip precision. My favorite part of his run was  his “pistol cork” or cork from a seated position on top of a wall toward the beginning of the course which. He also brought much more flow than many people expected to see from his navigating the course.

I’d have to say my favorite run would be Alfred’s, he hit a lot of difficult moves together and stuck pretty much every move he threw one of which being the seated dash gainer that he nailed with no hand touch. It was great to see him flow down the course very well while chaining some of the hardest moves in the heat all together. 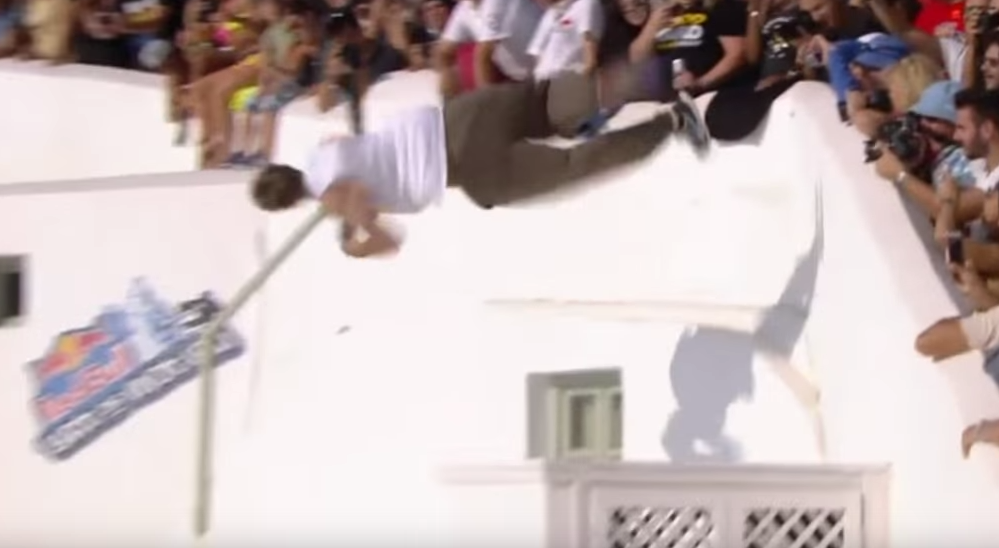 Dante Grazioli of Colorado’s Apex Movement is well known for his twisting movements and his utilization of several during his run in heat two was no surprise. He did not have the most successful landings on others he had attempted, but he made sure to land his double b-twist without a hitch. Being the only double from the ABC twists to be landed cleanly throughout the event, he gets our vote with little hesitation. 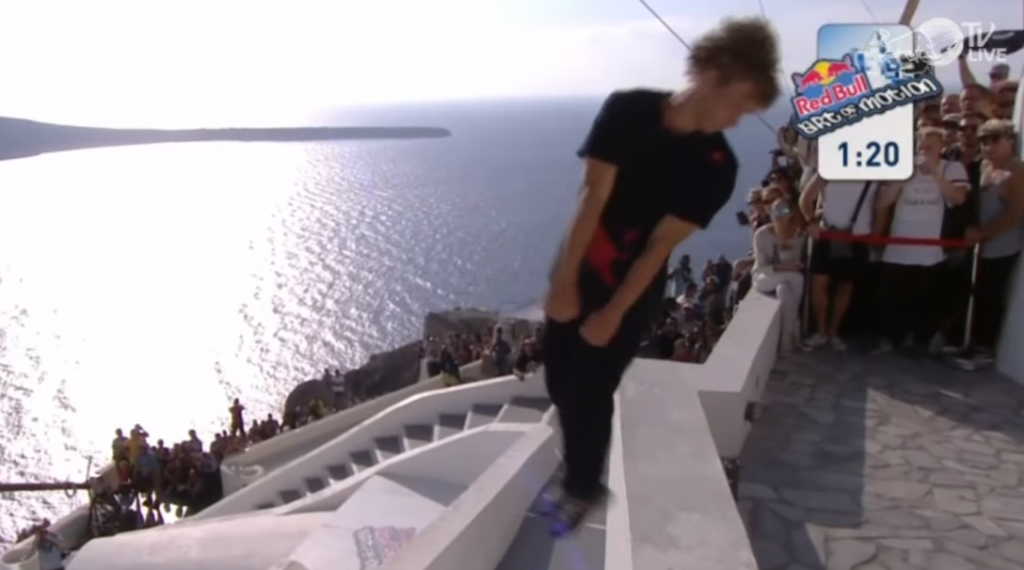 Pavel “Pasha” Petkuns is very well known for his style and creativity and who has also won the competition twice. We can say that this gainer completely caught us off guard. We were really expecting him to bust out a nice gainer pre here but instead he hit this stalled out turn vault and continued to hit a very solid run that landed him in the finals.

Alexander Schauer during his beautiful run hit a front walkover that most people may overlook, but it really caught our eye. Not very many people can hit a front walkover as clean as he did and he also hit this move right after a dash pass to a drop. It greatly connected his run as well as keep a hint of person style in his run.

My opinion lies with the judges when it comes to the best run of heat three belonging to Alex Schauer with his score of 472. Everything he did throughout his run came off as deliberate and that is what I believe a good run needs. I don’t feel that it matters if you felt you messed up at the end of it, but that you convince those watching that you were comfortable through it all. Alex Schauer and his door knocking did just that for me.

My favorite run easily lies with Pasha, his style and personality really shined through during his time on the course. He showed why people in the community use his name as a verb and his whole style as a way to describe new and interesting movements. He hit everything in his run only the way he could. 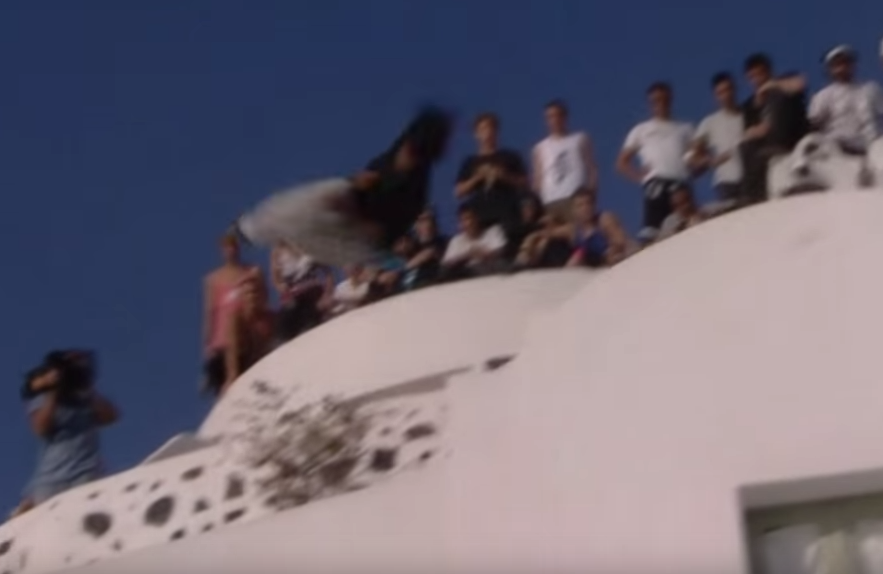 Mohammed Didi Alaoui hit some really sweet and difficult moves on the archs and walls of the course. The inward a-twist pre he hit next to a huge drop showed his confidence in his abilities and his high level of skill. He also chained this move into a very nice pimp flip.

We don’t exactly know what to call this move but it was weird crazy interesting and very Dk like. Dimitris Kyrsanidis hit what Frosti referred to as a take on a screwball but it isn’t a movement that we have seen before at least. This is something to become expected from Dk with his “can i add a twist to it” mentality. 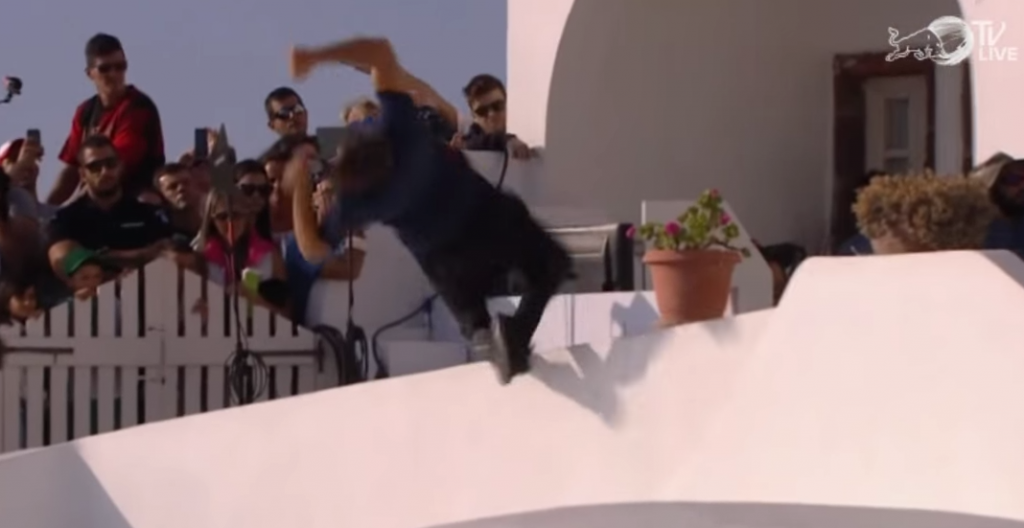 Jason Paul’s return to Art of Motion didn’t take us by surprise and neither did his qualifying for the main event after entering the on-site qualifier. Jason brought that classic Farang flow we’ve come to be fond of, but he also displayed movements we haven’t seen from him before. This backflip from his knees early in his run caught us off guard and sparked optimism for the rest of his run. We’re more than glad to have him back and that he said he’ll be back next year.

If you’ve spoken to me since my return from Australia, it would be no surprise that my bias lies with Dominic Di Tomasso and his run in heat 3. Dom’s style and flow met my expectations set by my time spent with him and the comical Art of Motion submission he released. He showed us both the largest front flip of the day and a clean 360 dive roll without hesitation. After his pulling out of the 2014 main event, despite having won the on-site qualifier, it was great to see my good friend competing amongst the greatest in the sport and looking happy whilst doing it.

I actually have to agree with Marquis being that Dom’s run was also my favorite he came out strong and finished strong hitting a array of both difficult and flowy moves. His run was very solid in my mind. I enjoyed every part of his run but I mostly enjoyed the smile on his face while he competed showing that he was having a lot of true fun during the process.

What more to say than Alfred Scott is a beast? It may have taken him two tries but he smashed this extremely difficult move that no one else has landed before, especially on concrete.

Macaco to back out 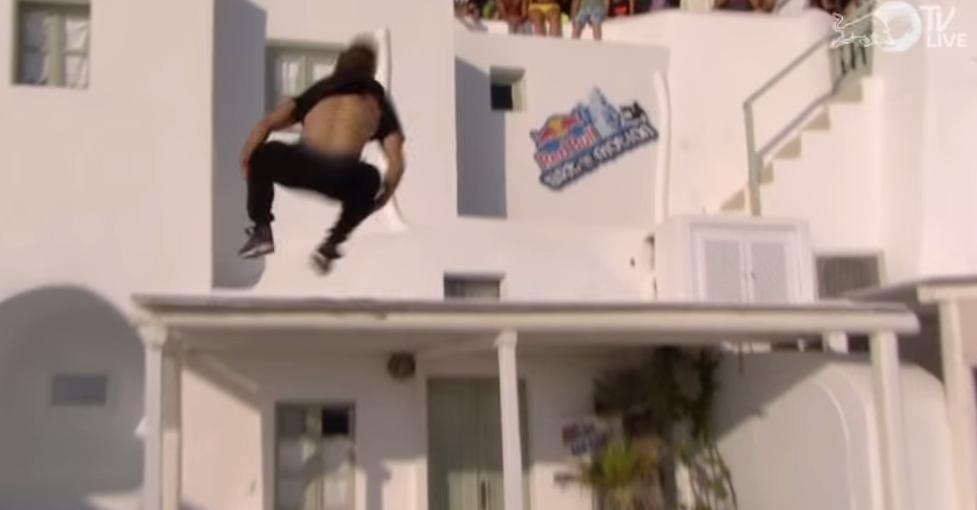 Pasha took this capoeira movement and leveled it up with a back out. After seeing Johan Stahle’s attempted sukahara from the same area, watching Pasha smash this movement was that much more awe inspiring. If anything were solid competition for Alfred Scott’s gaet pimp flip full, it would be this. 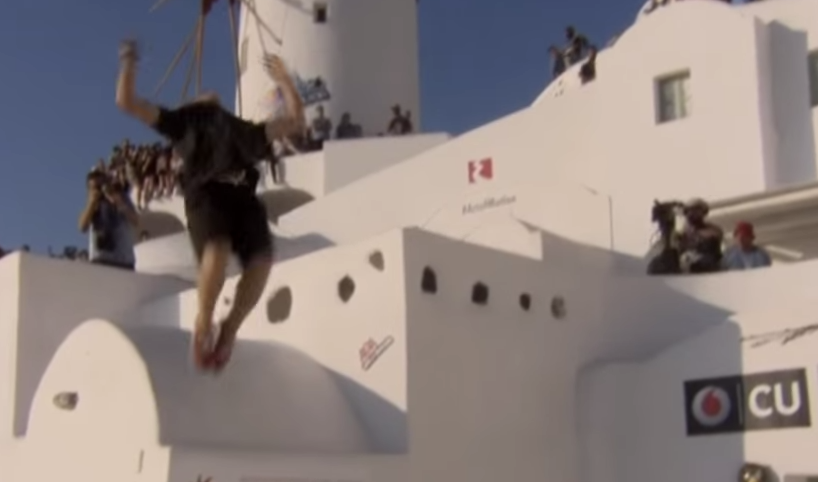 A gainer precision may not normally make a list of favorite movements, but the takeoff Alex chose for this one made it beyond worthy. Gainers shouldn’t be considered beginner movements and doing one with your heels raised shouldn’t be taken lightly. Managing to keep straight and continue forward was a grand display of control from Alex Schauer.

Pasha’s run was my favorite from heat three for a couple reasons. He came out swinging with a large gainer, but more than anything he didn’t lose his personal style and playfulness under the pressure nor did I notice any questionable landings. I don’t know that I can say that he deserved 1st place over DK, but I will say that he earned second place without question.

Pasha upped his level without losing the things that make his runs great, aka the flow the style the creativity. His macaco back out left me speechless and i must say that he did in fact earn second place without a doubt. In the end his run is my favorite because like i said he really stepped it up in the finals and didn’t stop doing Pasha things at all.

Congrats to everyone in the finals and everyone who competed.

Another large congratulations goes out to American Parkour and The Tribe’s Bob Reese! Bob is the first of the APK family to go to Santorini for the Art of Motion, earned 2nd place in the on-site qualifier, and showed the parkour & freerunning community his style in the main event with a huge smile on his face. Hope to see you there next year, Bob! 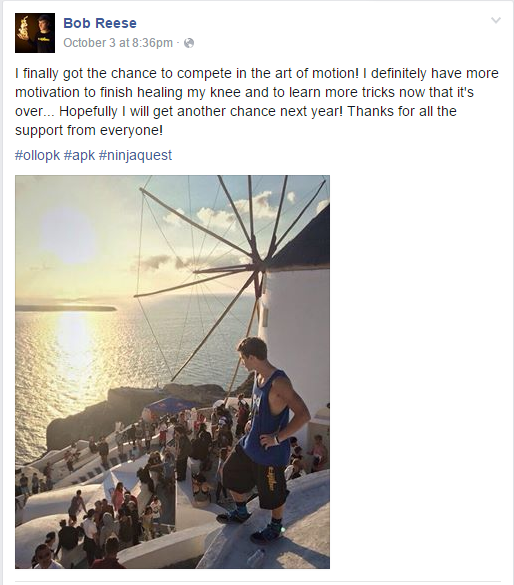 Patrick is a software engineer and consultant who's been doing parkour for a while now. Constantly trying to improve himself, at his peak, he lost 30 lbs because of parkour and martial arts. Currently on the mend, he's working every day to be strong to be useful.
Social Networks
Recent Articles