This has taken me an absurd amount of time to get done. I’ve been hemming and hawing over this post since November and it’s most of the reason there haven’t been any other posts since then either. My struggle has gone from ‘I’m so angry about this I can’t even find words’, to ‘I’d like to contribute to this conversation, but don’t know how’, to ‘Why am I even bothering to write this? It’s not like it’ll actually make a difference.’ And that’s where I’m still stuck now, to be honest. I’ve struggled to figure out what the actual purpose of this post is and have felt that it might not be worth publishing if I can’t figure that out. I understand that I’m probably preaching to the choir here, and that my words are very unlikely to have any productive effect, but maybe someone out there who does have more of a voice on the matter will see this and find it somehow useful.

For anyone finding this who doesn’t already know; On November 30th (2018), the United States Parkour Association issued an open letter to USA Gymnastics and the United States Olympic Council expressing their – and the general parkour community’s – strong opposition to the International Gymnastics Federation’s (FIG) plans to appropriate parkour and have it declared a subset of gymnastics and placed under its jurisdiction. The hope was that this letter, which was backed by a long list of organizations, would move the federation’s voting members to vote against this decision. Sadly, but not unsurprisingly, this effort failed. On December 2nd, USPK confirmed that the vote had in fact passed, and with dishearteningly little opposition at that.

The original declaration and letter from USPK can be viewed HERE.

Since then there has been a flurry of angry buzzing and outrage. The predominant consensus seems to be that this truly is raw appropriation on FIG’s part, as they hope to see parkour included in the Olympics as part of an attempt to compensate for fading interest in more traditional sports. Prominent organizations such as American Parkour, USPK, Esprit Concrete, and Parkour Generations have all put forth public rejections alongside a large number of individual athletes. Most of these have been published under the social media hashtag #wearenotgymnastics, as everyone attempts to make this point clear in their own way.]

This is my 5-cent contribution to that movement:

Parkour is not gymnastics.

PARKOUR. IS NOT. GYMNASTICS.

Who am I to be pitching in on this? I’m not a coach, the owner of a gym, or the organizer of events. I’m not on any boards or committees and I’ve never been to any of the coaching or feedback-oriented events (like Art of Retreat). I don’t even think I’m particularly skilled [yet] as an athlete, and outside of the people I regularly train with and around, hardly anyone knows who I am. I’m not a community leader, and for all intents and purposes, I have zero authority. What I do have, however, are my observations and impressions as a relative newcomer. If you’re reading this as a leader within the parkour community, consider conducting a pulse check on your local newer folks to see how they’re feeling about this. They’re the ones who will carry the community forward. Or not, if they feel sufficiently alienated.

What I see here is an aggressive grab for athletic capital that completely disregards the community in question. I see a strong, but still growing body of athletes and enthusiasts trying hard to defend itself against an impossibly large opponent. I see the underdog of this story doing everything it can to make its voice heard, only to be coldly ignored and brushed aside, even when that voice is formally organized and presented. I looked up to these organizations as a kid and it breaks my heart a little to see them behaving this way. It’s not that this hasn’t happened before, only that I hadn’t personally witnessed it until now.

I do consider parkour a sport, but it is also a discipline and a philosophy. It absolutely does have competitive potential, but that isn’t its explicit purpose and so far, I’ve understood that competition is generally friendly and simply there for those who care to participate. As a philosophy, parkour fosters a mindset of creative adaptability and resourcefulness. It is a careful and thorough learning of the rules, so that the rules can then be broken. With its purposeful, and often bold pressing of limits, it is as much a rewiring and training of the mind as it is a training of the body. It actively requires an ability to break free from perceived restrictions and boundaries and has, by definition, no prescribed forms. Imposing fixed rules and regulations on such an activity contradicts that spirit of free creativity. Having regulations imposed by a dominating, unrelated third party contradicts that spirit of free creativity AND undermines the sport’s current developmental trajectory. The parkour community HAS been developing its own governing bodies, but it seems those organizations are now in real danger of being rendered powerless.

If you are reading this as a non-parkour person, imagine that your favorite sport – or hobby, if you’re not athletic – has just been swallowed up by an outside body and declared a subdivision of some other, very distinctly different, activity. You and your community have just been told that you will now answer to this outside authority and do whatever they say, because they now get to decide what your activity looks like, who can be defined as a participant, and how it’s done. Attempts by your community leaders to defend against this takeover did nothing, and any existing community-based governing bodies are being ignored. How do you imagine that would make you feel?

How does this impact me? Why do I care?

Maybe it ultimately won’t really change much for me personally. Or maybe it will. I frankly don’t know. I don’t know what the coming changes will actually look like on the ground, and I don’t know where my path leads, so I can’t predict what any of this will mean for me, if anything. My greatest personal anxiety has to do with what I see as likely shifts in community atmosphere and tone. If nothing changes, or if some sort of compromise can’t be found, I predict a destructive warping of the current environment.

Looking down the road, I fear that only those who are, and choose to be, competitively viable will be taken seriously and ‘allowed’ to call themselves traceurs while the rest of us will be punted to the sidelines as ‘hobbyists’, regardless of our dedication and achievements. Much the way a person who, say, trains for and plays tennis for hours every week, but who doesn’t compete will reliably be perceived as a ‘hobbyist’, rather than an athlete, because at some point it was decided that professional competition is what differentiates the ‘dedicated athlete’ from the ‘casual athlete’.

People will get fed up with the changes – however they end up trickling down through the various regional groups -, the arguments, the politics, and the loss of things they valued and will leave. The community will lose people – GOOD people – as things change and shift away from what many feel and believe was the original intent and spirit of parkour, and some organizations and subcommunities may schism as they argue and grapple over the issue. Parkour’s beautiful air of playful, free spirited rebellion will wane. A sport that already struggles with an especially daunting and intimidating public image will become even MORE daunting. People – like myself when I first started –  who are intrigued by the concept of parkour, but wary of unknown communities and low in athletic confidence will be more likely to feel critically intimidated by the increase in competitive focus that will inevitably impact the sport’s public impression.

This will hurt the entire sport.

I fully recognize that an atmosphere of rules and competition is beneficial and desirable for some, but we should have the freedom to choose that for ourselves. We – those of us out there literally busting our butts – should have the right to determine our own sport’s path and future.

I don’t pretend to be even vaguely competitively viable in parkour, but I have, and am continuing to put in a damn large amount of literal blood, sweat, and sometimes tears into it. I do feel that where I’m concerned, the titles ‘athlete’ and ‘traceur’ are things to be earned, and I’m not entirely sure if I have earned them yet, but I would very, very much like to retain the right to earn and keep them. Parkour is no longer a hobby for me. It’s a way of life and a personal philosophy. I’ve seen that sentiment in others, and in the community at large, and am desperately afraid that it will eventually go lost because of this vote. Parkour has literally changed my life and is helping me move beyond major personal obstacles, where everything else I’ve tried has failed. I know I’m not the only one who’s had that experience and I worry that the current spirit of personal exploration, understanding, growth, and challenge will disappear.

I will continue to practice parkour in the way that most benefits me regardless of whatever happens next. But what of all the other ‘me’s’ out there who might desperately need this, but who may soon feel too alienated to continue, or even try?

Note: This article originally appeared on the blog A Particular Set of Skills.

americanparkour
•
Follow
APK is holding tryouts for the 2022 WCT Season! If you're interested in trying out, you'll need to do the following. Create a Tryout Video (Details for that are on our YouTube LINK IN BIO) Upload that Video to Google Drive and Share that video/folder with apksubmission@gmail.com The deadline for submissions is the Ides of March (if you don't know when that is, better find out) QUICK CLARIFICATION FOR OUR APK FANS This does NOT mean we are scrapping all our previous athletes, in fact you'll most likely see most of them again (because we have some BEASTS on our team) but we do want the best athletes for our teams (as the brothers say, they want to see the best people chase). So holding tryouts opens the doors for new athletes to enter the sport Now Good Luck! And remember, Don't Get Caught #parkour #freerunning #apklife #apkparkour #precisionsticks @worldchasetag @wctfans
View on Instagram |
1/6

americanparkour
•
Follow
Check out American Parkour Founder Mark Toorock's talk "Individual Together: Building Parkour and Movement Communities" as part of the Embodied Movement Summit. Please use APK's affiliate link (LINK IN BIO) to get your free ticket to this incredible event with over 27 expert presentations including Sebastien Foucan and Kelly Starrett . #parkour #freerunning #apklife #apkparkour #precisionsticks
View on Instagram |
2/6

americanparkour
•
Follow
And that's day 1of the APK Coaching Cert! We had great discussions about the qualities and foundation of a great coach here at @swiftmovementstudio Now it's time to prepare for day 2! . #parkour #freerunning #apklife #apkparkour #precisionsticks
View on Instagram |
3/6

americanparkour
•
Follow
Time to start the week, and we'd like to start it with a smooth set of tac flows from @d3fythenorm . How do you start you week? . #parkour #freerunning #apklife #apkparkour #precisionsticks
View on Instagram |
4/6 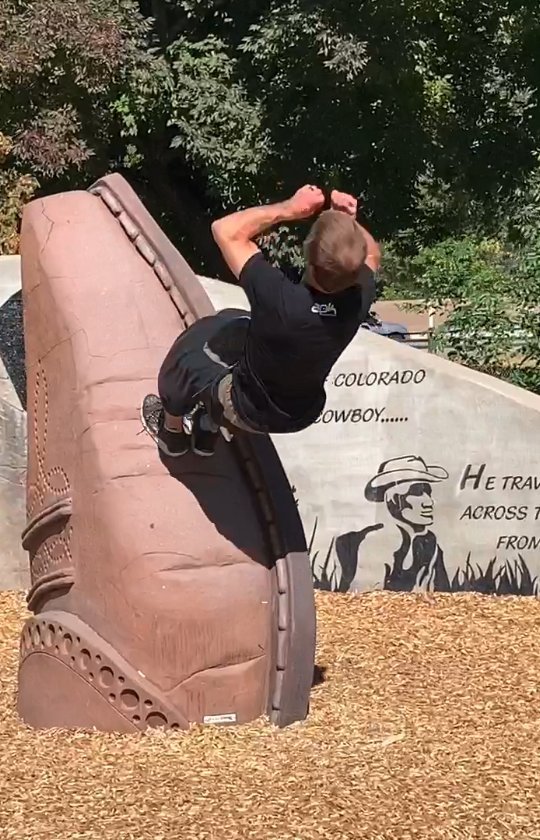 americanparkour
•
Follow
What better way to start your week then some beautiful movement from @bringeroflight5853 How do you like to start your week? . #parkour #freerunning #apklife #apkparkour #precisionsticks
View on Instagram |
5/6