What is your name and occupation?

My name is Steve Zavitz. I currently work full-time in the operations department of Tasting Table, but I am also a freelance videographer and photographer in NYC.

How did you find out about parkour and how long have you been involved in the  community?

I started rock climbing my freshman year of college and had a particular interest in buildering and urban climbing. After searching for some videos on YouTube, I stumbled upon Oleg Vorslav’s “Russian Climbing.” I had no idea what parkour was, so I spent the rest of the afternoon scouring the web for videos (mostly stuff from 3Run and some of the old school David Belle videos). It was unlike any movement I’d ever seen, and I knew I had to try it out. A few days later, my roommate found out that there was a club at the University of Michigan, and we started going to sessions that week. That was back in 2008, and I’ve been training ever since.

How has parkour impacted your life since you started?

I’ve met some of the strongest, most supportive and unique people in my six years of training. Many of my best friends today are practitioners. This movement has taken me across the country and introduced me to men and women from all over the world who share the same passion. I don’t know where I’d be without parkour.

I know you were heavily involved with the University of Michigan Parkour Club during your college years. How were times different back then during the early stages of Parkour clubs forming on campuses?

Thankfully some exceptionally talented and devoted traceurs put in a lot of hours to set the groundwork for MIPK to thrive. By the time I got involved in organizing, we were already an official University of Michigan club, had given various informational talks to the public in our city about parkour, and attended yearly meetings with the campus security to foster a healthy relationship. I didn’t realize until later that many parkour clubs and campus communities struggle to gain and maintain legitimacy with college administrations.

In some ways it was easier to create a community in the early days because no one knew what parkour was. You could explain the importance of safety and discipline in your training, and, if you were lucky, people would believe and support you. Nowadays it just takes a single search on YouTube to come across bail videos or roof jumps gone bad, and you can easily find yourself on the defensive. We had our fair share of issues with public safety officers and building managers, but I tend to think that we drew less attention when I first started training. As more people started recognizing parkour, we found ourselves getting kicked out of places more frequently. Signs like thisone seemed impossible in 2008, but they’re popping up more and more frequently.

Any defining moment that has really stuck during your time at Michigan that you’d be willing to share with the rest of the world?

I’m sure we’ve all seen those kids who pick up parkour like it’s nothing and are doing double kongs in their first week of training. Unlike them, progress has always been slow for me, and nothing has ever come easily. I remember in my first few months of training, the MIPK club held a BBQ and invited all of the members to hang out. Some of these guys had been training for years already and could jump circles around me. Instead of feeling intimidated, everyone made me feel welcome. In no time they were teaching me about the history of parkour and telling me about some of the legendary spots around the country. It felt like being part of a big family.

Why did you start making parkour videos?

Back when I started training, there weren’t too many people making parkour videos. Only a handful of traceurs even owned a camera, so the only way you could check out new spots or see a different community move (other than hopping on a plane to visit) was through the occasional jam video. I started filming my friends in Michigan because I wanted to share our community, showcase some of our spots, and give people a taste of our style of movement. 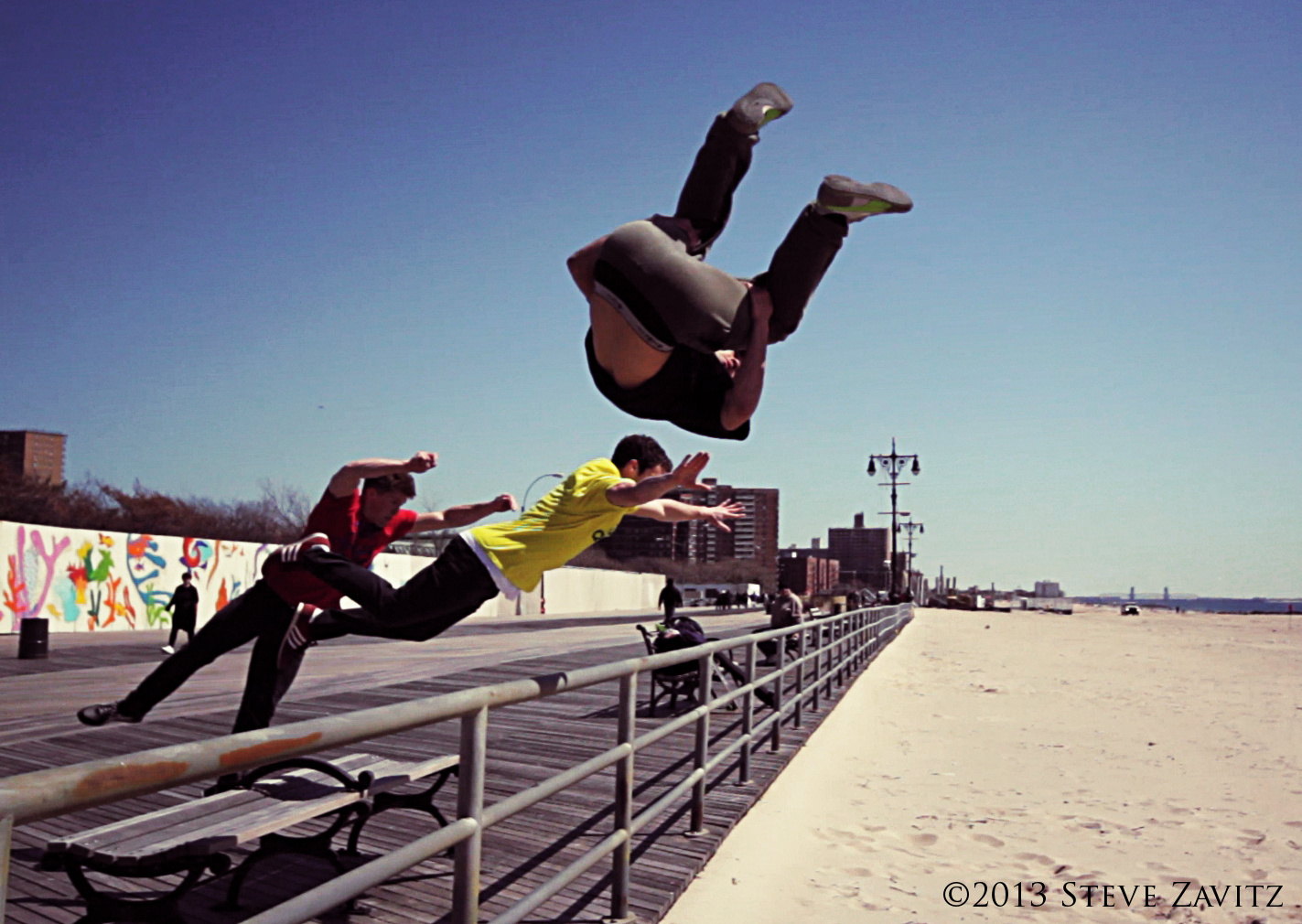 What about parkour helps you express what you want that some other subject doesn’t?

Parkour is incredibly dynamic and spontaneous. Some of the best shots I’ve captured over these past few years were taken in the spur of the moment; I just happened to be lucky enough to have a camera in my hand. Because of this, shooting parkour is very free-form, and there really aren’t any rules. I love that it gives me total creative flexibility.

What is your favorite video made by someone else and why?

Now that’s a tough one! Can I name my top three? I’d have to say Teghead’s SproinkingtheEnvirohurdles was one of my biggest inspirations. It was the first video I ever saw that had a mix of great lifestyle footage and fantastic movement. I remember thinking, “I want my videos to be like that someday.” Next up would have to be Scott Bass’ ProfessorLonghair, BigChief. This video had a profound effect on my training and my filming style. In fact, I even tried to copy Scott’s (Bass) style in this video when I was planning out the shoots for one of my first videos (unsuccessfully, I might add). Lastly, I think I’d have to say Storror’s ChapsonTour 2011. Besides some incredible movement and editing, it created a whole sub-genre of “good life” parkour videos. I still consider it to be one of the best (if not the best) long form parkour videos.

Now that you’re out of college, you do quite a bit of film and photography professionally. Who are some the notable members of the Parkour community that you’ve worked with and for what projects?

I did a shoot with Tempest Freerunning back in 2012 for their “Homecoming” video at Virginia Tech. More recently I did quite a bit of filming with Guillem Mataro Pereira from Born to Trace. I’m still working on my edit for that one, but he already released a video on his channel using some of my footage. Oh, and I met some of guys from Storror at a rooftop party while they were in NYC filming Chaps USA. Because the community is pretty tight in the city, I usually end up at a training session or two when someone from out of town drops by. 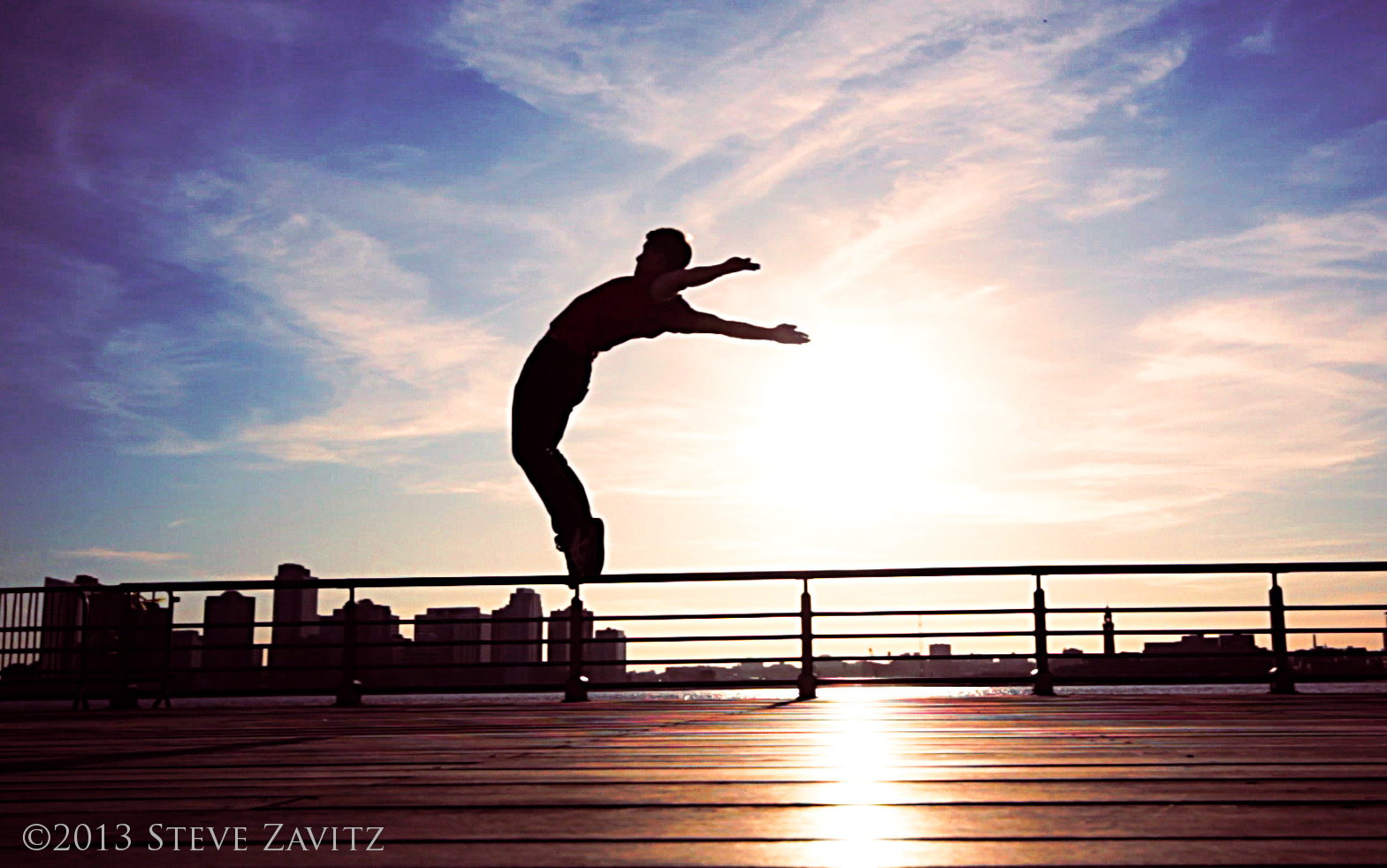 If you could film anyone, anywhere, who would you bring, and where would you go?

I’d have to ask Kie Willis along for the ride. He’s one of my favorite athletes to watch, and I think it would be a blast to shoot a video with him. As far as locations are concerned, I’d love to go somewhere completely new. Finding a remote area in central Asia or South America would be really cool.

The main reason I keep making these videos is because I want to share a piece of my community with everyone. When people watch my videos, I want them to think, “Those spots look sick,” but also, “I want to hang out with these guys!” That’s why I show off things like my friend, Jonny, eatingarawegg or Travis beatboxing. None of us take ourselves too seriously, and I hope my videos reflect that.

If you want to reach Steve you can e-mail him here: [email protected]