Jesse Danger is a staple of the New York parkour community, having been around since the beginning. As the founder of The Movement Creative and a parkour instructor for over 8 years, Jesse has done nothing but good for parkour’s image.

Jesse has taught in schools and believes that “parkour’s true usefulness lies in the physical preparation and mental fortitude to see any challenge as an opportunity to better oneself.”

He’s traveled and trained with people from around the world, and worked alongside with many of the country’s leading Parkour instructors. Jesse has performed professionally for organizations such as The New York Knicks, Nintendo, and Bulletrun.

We had the chance to catch up with Jesse and ask him a few questions about life, parkour, and stories from his past:

[APK] You say that you connected strongly with the founders’ “be strong, to be useful” philosophy.  Can you explain that a little more?

For many the exploration of their own movement seems to suffice as a reason to train. For me to have a deeper intrinsic purpose to training makes it feel much more worthwhile. I believe in the idea that we are not only training for ourselves but also for those around us.

When you look at parkour you look at it as a way to help others. How often do you get to live out this practice? Do you think in today’s world parkour has a place as a way to improve people’s lives?

For me, in the loosest sense, I derive a great sense satisfaction to see the same people week-in and week-out, consistently coming to sessions and truly improving. I think physical creativity is a lacking necessity in most of peoples lives; we need to do more, learn more, always.

I have also worked with students that their school teachers said had a hard time following directions–they ate up every word we had to say outside, and even performed better inside the classroom after our session!

So you organized America’s first national jam and it’s still going on today? What was that like? How has it evolved over the years?

This isn’t entirely accurate. I started the PKNY national jam, which evolved as a replacement for PKUSA (technically America’s first national jam, that was discontinued.) I believe Skipper’s (B)east Coast is currently the oldest, continuously running American jam.

PKNY started as a group of 30 or so friends coming out from across the country, to having over 100 people jamming in the city and over 60 staying with me. It has waxed and waned from year to year depending on how well organized and publicized it was. I think the consistent effort that we have been trying to stress is a welcoming environment for beginners and a situation that showcases the best of what the Parkour Community has to offer.

Tell us more about your main project, the Movement Creative. Can you dive deeper into the details about your school programs?

A couple years ago, I felt a little cynical about the direction Parkour was going. For a really long time I had been philosophically distancing myself from the community.

The Movement Creative was started on the idea that if you don’t like the direction that something is headed, it’s your obligation to steer it. The things that we believe in are nothing revolutionary; they are all the things that were strong in Parkour when I started training.

We focus on community, value effort, strive for creativity, and always do our best to play, have fun, and enjoy movement.

This past summer I had the privilege of running a Movement-Game Design Camp with Q2L. I believe strongly in game-based learning. At camp, 20 students learned the basics of Parkour, combined with the basics of game design. They got to play and modify many of the games we have come up with over the years. They finished their week by creating their own games that help train different aspects of Parkour. It was an incredibly enriching teaching experience. 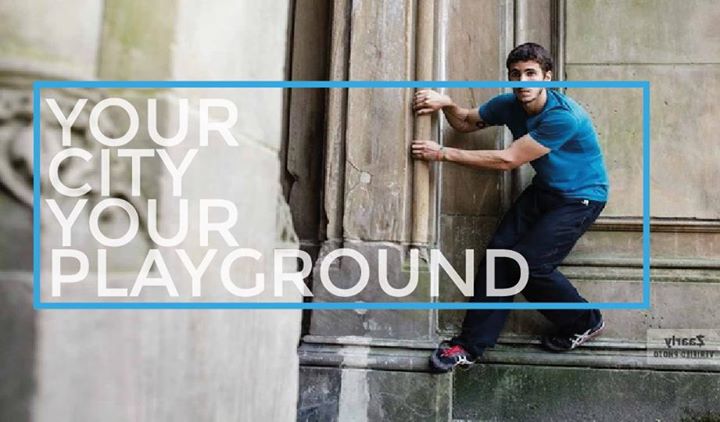 Photo courtesy of The Movement Creative

That sounds awesome! Can you think of any games off the top of your head? Do you use any of them when you teach parkour?

One of my favorite games that they came up with was Dodge-kour, team one had to get from point a to point b without getting hit with a ball.

What moment, would you say, defined you as a traceur?

I think of traceur as an ideal. A traceur is a fully committed practitioner of parkour, and anyone claiming to be one is saying that their training is adequate. I think the very nature of parkour compels us to look for better ways to train, to be constantly looking for ways to improve and to embrace challenge.

That said, one of the moments that I felt most validated my training was back in 2010. I was staying with my friend Zac Cohn in Savanah Park, Maryland and a blizzard “snowmageddon” hit. I had woken up early, around 3:00 AM, and noticed the snow building up and decided to get a leg up on shoveling the walk. As I continued to shovel I was joined by Zac and his sister, as well as Janine Cundy.

Snow had fallen such that there was 3 or 4 feet of it over everything. They could not get plows into the neighborhoods, so we shoveled the drives of our adjacent neighbors, as well as any elderly people that Zac knew in the area. Over the course of the day we shoveled several driveways and ended up digging out the whole street. We kept shoveling that day until 11pm.

This wasn’t running, or jumping, or vaulting, but it was being useful, and more than any other moment it felt like what we train for. 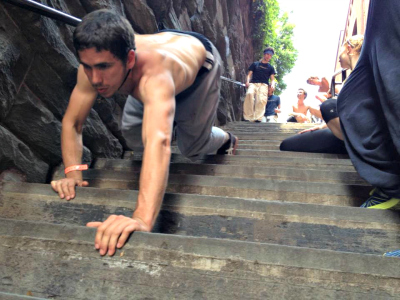 That’s a great story! It really speaks to something that a lot of practitioners talk about but don’t always ‘live out’ so much. Did that day of shoveling teach you anything? Can you think of any other times where parkour made you useful to other people?

A couple parkour friends of mine hiked up a scramble a few weeks ago. One friend brought his dog, who started out eager, muscled through the top, and promptly gave up upon the suggestion of going back down. It was an eighty pound lab and we took turns carrying her down the steep and precarious incline until we got back to our cars. More than just the physical strength to do something, Parkour gives us the mental fortitude to do whats right, even when it’s difficult or inconvenient.

New York is the largest City in the U.S. by population and the 24th in area. On top of that it’s ”the” concrete Jungle. Why do you think there aren’t thousands of traceurs running around?

I think the issue in New York is two-fold:

Our city is an incredibly vertical city. We don’t have massive plazas and areas of open space to train in. The second issue is that what space is left is for the most part highly regulated. Playgrounds are only allowed for people 13 and under and training elsewhere is under heavy scrutiny.

That being said, I lead weekly training sessions in fantastic spots all around the city. We train respectfully and responsibly and we do not regularly get kicked out of a spot. My biggest piece of advice to people that find heavy issues with law enforcement and security is that looking and acting as though you are actually training goes a long way to ensuring regular use of a training spot.

You mentioned “looking like your training.” Do people really treat you that differently if you look like you’re exercising? Why do you think that is?

People have lost touch with what the human body is capable of. The public sees most of what we do as dangerous and the media does whatever it can to encourage those thoughts. Because of this it’s imperative we train with discipline and control. Looking like you are training means drilling, progressing, staying safe. The more complex and dynamic the movement the more control you have to be in to convince any onlooker that you pose no risk to person or property. I think we should all strive do only things that make us stronger, and we should risk nothing that could take even a day away from our training.

Well thanks again, Jesse. It was great chatting with you!

If you want to learn more about The Movement Creative or Jesse check out their website and Facebook page.