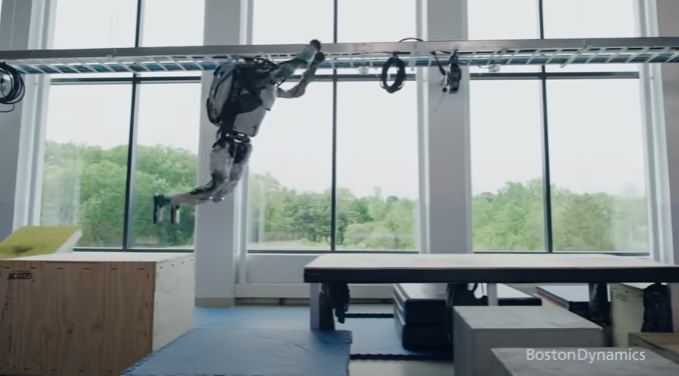 Can a robot do parkour? Can it make a jump like a human? BostonDynamics

Parkour has long been a sport that easily goes viral. Something about watching a human push their physical limits to the extreme is addicting. On the other hand, engineers pushing the capabilities of robots have captivated the populace as we await our impending android takeover. Boston Dynamics and the Atlas team have played to both audiences with their most recent video release. Check out Atlas, the Parkour Robot.

This video has reached Youtube’s top 10 trending videos in just two days and showcases the highest athletic ability of humanoid robots. Two Atlas robots perform a duo parkour line in true Cave brother fashion. One may ask if Boston Dynamics is saying their robots are doing parkour for the viral aspects, or if they are training their robot using the tactics that parkour athletes have been using for decades. Boston Dynamics gives insight into their process in a video entitled “Inside the Lab: How Does Atlas Work?”.

“Running the entire course, doing it in one continuous set of operations really drives the need for reliability and repeatability.” – Arron Saunders (Chief Technology Officer)

When learning a new movement in parkour, the end goal is never to be able to do that skill by itself. It is commonly said that to fully unlock a skill, one must be able to use that movement to begin, continue, or finish a line. Being able to place that trick in any area of the line requires reliability and repeatability. The Atlas team understands that simply being able to perform a single trick with their robot is much easier than coordinating a full line.

“We are exploring how to push it to its limits, sometimes operating at those limits. And we learn a lot from that in terms of how to build robots that can survive falling on their face and getting back up and doing it again.” – Benjamin Stephens (Atlas Controls Lead)

Every parkour athlete can appreciate the bail montage in the “Inside the Lab” video. From undershooting a precision and taking it to the gut, to scorpion-ing a backflip, parkour practitioners feel that pain. Something about seeing Atlas fall in the same way humans fall is one of the most interesting aspects of this project. They have made a robot that can fall on its face and get back up. That is where the real learning process takes place – failing, recognizing the mistake, and adjusting to succeed.

Looking back at the trending video, how does the line hold up to human lines? Is it doing parkour? While Atlas may not have the light touch of Phil Doyle or the creativity of Joseph Marx, the parkour is not to be scoffed at. Atlas is a 5 foot, 190 pound chunk of machine actually doing jumps. The footwork is strong and the synchronized backflip precision was quite impressive. It would have been cool to see more vaults by the robots, but that may come with time.

Boston Dynamics has made some serious jumps toward adaptive robots by using parkour mindsets and movements. At American Parkour we are impressed and inspired by the work done by Boston Dynamics. Atlas has proven that anyone can do parkour if you can learn how to get up off your face. Don’t let a robot be better than you – get up and start jumping!