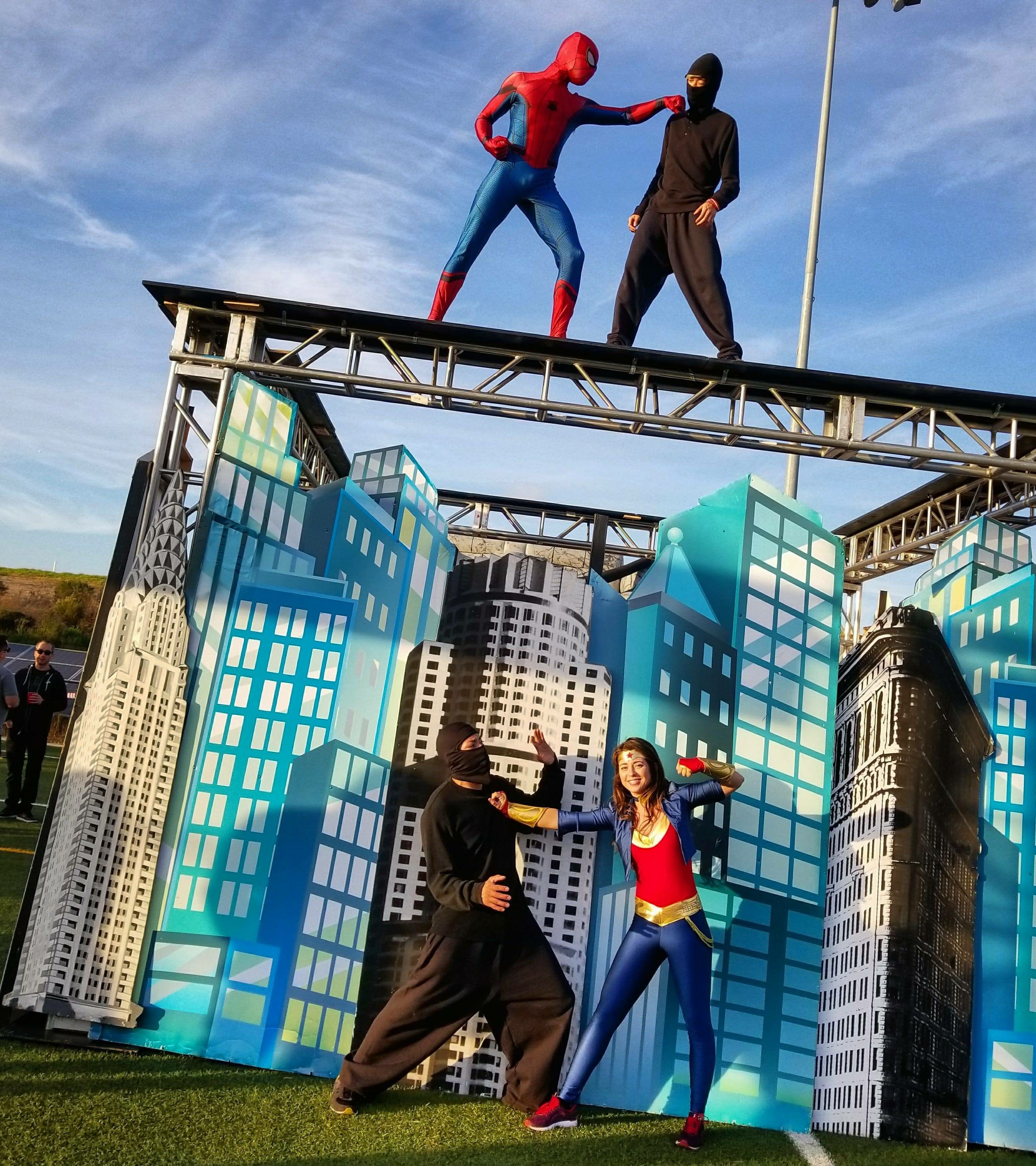 Tribe Member Raul Piscoya and APK Ambassador Gabby St. Martin recently had the opportunity to do a performance for Google’s Halloween festivities, called Googleween, out in San Francisco.  The theme of this year’s Googleween was ‘movies’ and the company’s employees and their families gathered to watch Spider-Man and Wonder Woman team up against the bad guys!

Super heroes to save the world!

Although a bit outside of his comfort zone with less parkour and more stage fighting and big stunt falls, Raul was eager to push his training and he was excited for the opportunity.  After learning the details of the job, he invited three of his friends to join him–an opportunity is always better when you can share it with friends–and the parkour crew began rehearsing their fight scenes and pulling their costumes together.

On day one, children filled up most of the seats in the audience and what child doesn’t love superheroes like Spider-Man and Wonder Woman? The kids loved the show, routing for their favorite superheroes in the fights and cheering when the heroes won against the bad guys! Two of the athletes went in dressed as robbers, but the kids thought they were ninjas so they rolled with it.

Although there weren’t many planned parkour sequences for the show, Raul and his friends found ways to sneak it in.

Dressed as a robber/ninja, Raul used parkour movements to traverse the stage and then he had an idea to add to the show.  As his ninja friend was cornered by heroes on top of the stage, Raul jumped off, clearing the 10-foot drop with a classic parkour drop-and-roll and standing up just in time to catch the money bag his fellow ninja had thrown to him.  The kids and their parents gasped and then cheered for the unexpected move.

On day two, the athletes planned for the same chase scene, but didn’t anticipate that the audience would get excited and want to jump in.  As Spider-Man chased the bad guys around, the kids joined in and there was much pulling, scratching, and pinching involved.  Those kids really wanted to get the bad guys!

On the last day, the audience was all adults, rather than kids with their parents and adolescents.  Instead of sticking with the routine, Raul and his friends improvised and fed off the energy of the crowd.  It was a fun opportunity for them to integrate more parkour movements and flips into the show, as well as drops off the stage to do tricks next to the audience.  One audience member was feeling particularly inspired and ended up breaking the city wall as he attempted a wall run just like he’d seen one of the ninjas do.  Best to let the professional ninjas do their thing or get a bit of instruction first, folks.

Overall, Raul and his friends had a blast and the kids absolutely loved it. Successful Googleween 2017.  After the last show was over, the contractor asked what company Raul and his friends performed with–a great compliment given this was their first time doing a show like that.  Perhaps there’s more superhero vs. ninja shows in their future!