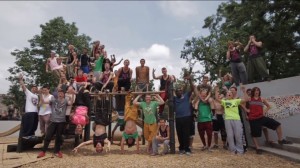 For years I have been wanting to go out to Denver to check out the apex gyms, but my trip did not turn out as I planned. After spending 2 days in Colorado Springs visiting my cousin, I went up to Denver to pick up a friend at the airport to visit the Boulder gym. While waiting I see a group of guys in parkour shirts and sweats, before I know it I am heading back to Colorado Springs to attend Tit Jam.

I was invited and convinced to come  by one of the hosts, Justin Sheaffer. He is the creator of Tit jam, back in 2011 he was headed back to Colorado Springs and wanted to host a jam with his friends. In 2012 he lost his aunt and decided to make it an event to raise money for breast cancer, which is when it all really began. In its first year they raised about 1,500, their second year they raised 2,100, and this year they hope to raise 5,000.

Justin and Joe’s goal is to make an event like none other, to have people leave feeling like they are part of family and more than just a community, which they have truly done.

When I arrived at the event, I saw a house surrounded by tents. I came to learn that it was Joe  Lobeck’s family home, home base for the event. His family had set up food and tent housing for everyone to stay for the week. What they built was a week long parkour city, everyone was chipping in for the food and helping with the clean up. After all the hellos and pre-raining, a small group conversation began. An inspirational discussion about life and why we all train which drew the event’s entire crowd.

The week long event has everything from a Tranquil Initiation Tradition, cliff jumping, and a Flobots concert to gym sessions, tricking battles, and parkour competitions.

Because they reached out to the news last year and talked to locals about their “bucks for back flips” to raise money, they actually had the news reach out to them this year.

Besides all the good they are doing to raise money for breast cancer, they are creating a positive image for parkour in Colorado Springs, they are showing that is not only about the movement it’s also about the community.

For those looking to check out different national jams next year, this one should be at the top of your “to attend list.” I could only attend two days of the event, but after one day I feel closer to the people at Tit jam than at any other event I have left.

If you would like to help them reach their goal of $5,000 you can donate at: www.stayclassy.org/TITJam2014

Or if you want to know more about the event visit: www.tranquilmvmt.com